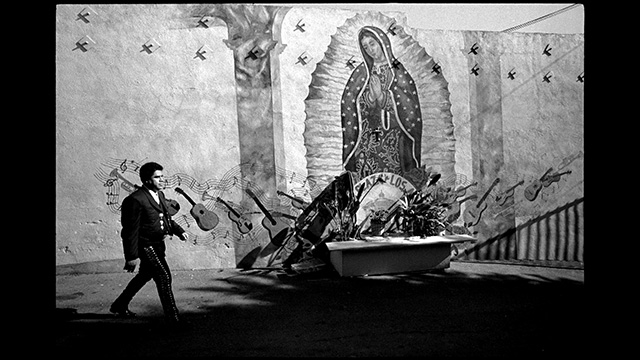 Renowned New Mexican photojournalist Miguel Gandert’s common ancestry with his subjects helped him create an insider’s view of contemporary Indo-Hispano culture – a culture which, despite change, maintains deep roots in the past.

“In a strong photograph, one can look at it and understand the humanity that exists within us.”

Filmmaker Alicia J. Rose takes us inside her edit room to see how the ultra-low budget film “The Gift of Gravity” comes together.
“The editing part of the film is in some ways the most important part of the film. And there are so many choices along the way, so many choices. I mean, you could really come up with a really great movie or a really crappy movie.”

More than 65 years ago, photographer Gordon Parks captured the realities of life under segregation.
“He found one friend, Masel, who was in very dire straits, and he described her as the class tragedy. She was living with an abusive husband, who actually held up Gordon Parks with a gun and took all his money.”

Coffee connoisseurs are creating the ultimate drink by carefully controlling every step of the brewing process.
“An espresso – if you look at the root of the word, it refers to ”expressly” for you. It’s not about speed. It’s about ‘I’m making a drink just for you.’”