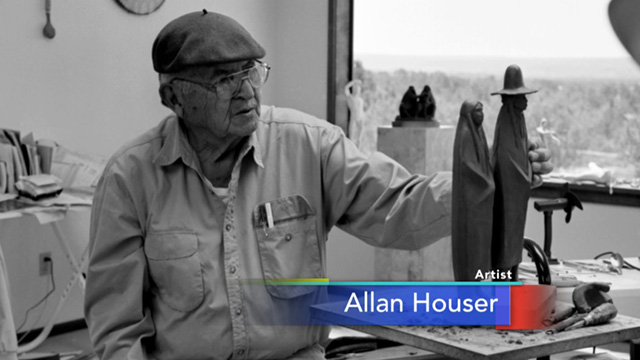 One of the most important American artists of the 20th century, Chiricahua Apache sculptor, painter and educator Allan Houser left an enduring legacy.

Known for collaborating extensively with filmmaker Tim Burton, composer Danny Elfman performs his work despite terrible stage fright.
“‘You’ve never sung these; you want to come out and sing?’ And I was like, ‘Oh yeah, sure, that will be fine.’ That’s how my mind works, you know, it’s like sabotage and then later it’s like the other part of my mind, the rational part, is like, ‘What are you thinking?’”

Artist Cat Del Buono tries to tackle the question, “What do you like about yourself?” in video portraits.
“When you’re sitting on the subway, and you start looking at people, you start… guessing who you think they might be.”

Cecil B. DeMille mastered the art of the Hollywood movie spectacle. DeMille’s granddaughter Cecilia and historian Mark Vieira share stories of this icon.
“He felt a responsibility to his audience. He felt he had a message to convey, but also he felt that he was going to do it the way he wanted to do it, and not be messed with.”