As high winds whipped dust, Siberian elm seeds and recycling bins around Albuquerque Thursday afternoon, dozens of people filed into the U.S. Bureau of Reclamation’s Albuquerque office to hear the agency’s 2018 forecast for the Rio Grande.

“I’ll be the bearer of bad news,” said Reclamation’s Albuquerque Area Manager Jennifer Faler. “This is the most extreme shift we’ve had from one operating plan meeting to another.”

Last year at this time, snowmelt was pouring down the river, flooding riparian restoration projects, filling out farm fields and even pressing against levees. This year, the lack of snowpack throughout the watershed’s mountain ranges has left the Rio Grande low and slow—and dry for 14 miles south of Socorro. Currently, the river is dry through the Bosque del Apache National Wildlife Refuge.

Related story: It’s only April and a stretch of the Rio Grande has already dried

“It’s fortunate we have those dams and reservoirs up there,” Faler said, referring to reservoirs in northern New Mexico that store water for the Middle Rio Grande Conservancy District and the Albuquerque-Bernalillo County Water Utility Authority. “That’s why we have them,” she said.

But later this summer, the conservancy district’s water storage is expected to run out, as is Reclamation’s supplemental water. That refers to water the federal agency leases to boost flows in the river and protect endangered species like the Rio Grande Silvery Minnow.

“We do expect to see drying in the Albuquerque reach this year,” Faler said, of the stretch of the Rio Grande that runs through the state’s largest city.

“And misery loves company,” she said. “On the Pecos [River], we’re expecting zero runoff from snowmelt into the reservoirs this year.”

In difficult times, people work together better, she said, adding, “We expect a ton of cooperation this year.”

During his presentation of the 2018 operating plan for the Rio Grande, which is compiled each year by Reclamation and the U.S. Army Corps of Engineers, hydrologist Ed Kandl offered additional details.

In addition to the news about the conservancy district’s stored water, and Reclamation’s supplemental water, running out, Kandl said New Mexico will likely enter into what’s called Article 7 conditions on the Rio Grande by May.

Kandl shared slides forecasting flows along the Rio Grande based on the winter’s snowpack analysis. Of the Embudo gage in northern New Mexico, he said, “We’ll be flirting with 100 cfs throughout most of the year.”  Already this year, that stretch of the river has been running at less than half what it normally does. 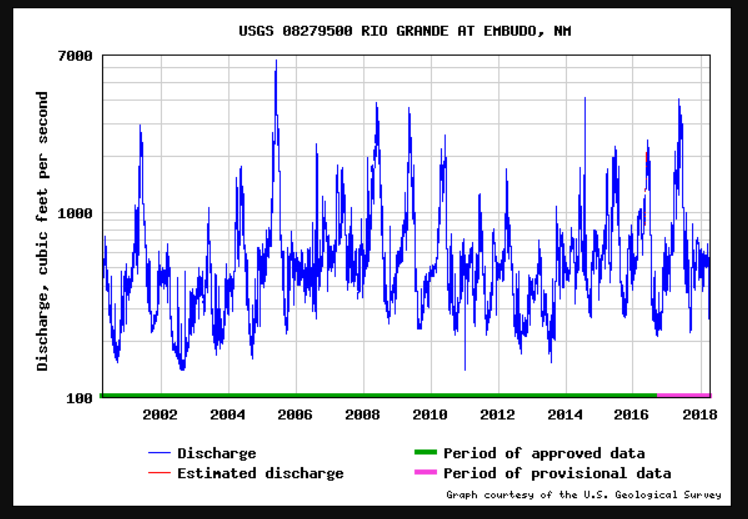 For perspective’s sake: water flows at the Embudo gage on the Rio Grande in northern New Mexico from April 2000 through April 2018. During that entire 18-year period, only occasionally dipped as low as 100 cfs.

The “scariest” one, Kandl said, is the 2018 flows for the Rio Grande at the Central Avenue Bridge in Albuquerque, where the river will likely dry this spring and summer.

Kandl and Faler both said area residents should be prepared to see the dry riverbed. “The worst part is still coming,” Kandl said, “Though, maybe we’ll have a good monsoon.”

Over the next several months, Reclamation will also begin working with its stakeholders to update a basin-wide study of the impacts of climate change on the Upper Rio Grande.

That 2013 assessment looked at the potential impacts of additional temperature increases of 4 to 6 degrees Fahrenheit by the end of the 21st century. Their study showed that flows on the Rio Grande will likely decrease by about a third, and flows in tributaries that supply San Juan-Chama water to the system will decrease by about one-quarter. In addition, snow will melt earlier and summertime flows will decrease. And as the month-to-month and yearly variability of flows increase, the “frequency, intensity and duration of both droughts and floods are protected to increase.”

The one “bright spot,” according to Reclamation officials on Thursday, is for rafters and recreationists on the Chama River. Because the agency will be releasing water from upstream reservoirs, the river’s flows will be good for rafting and kayaking.

The conservancy district’s hydrologist, David Gensler, offered characteristically optimistic comments at the end of the meeting and reassured people things will be okay. “Over almost 20 years,” he said, “we’ve all learned how to work really well together and use all our resources.”