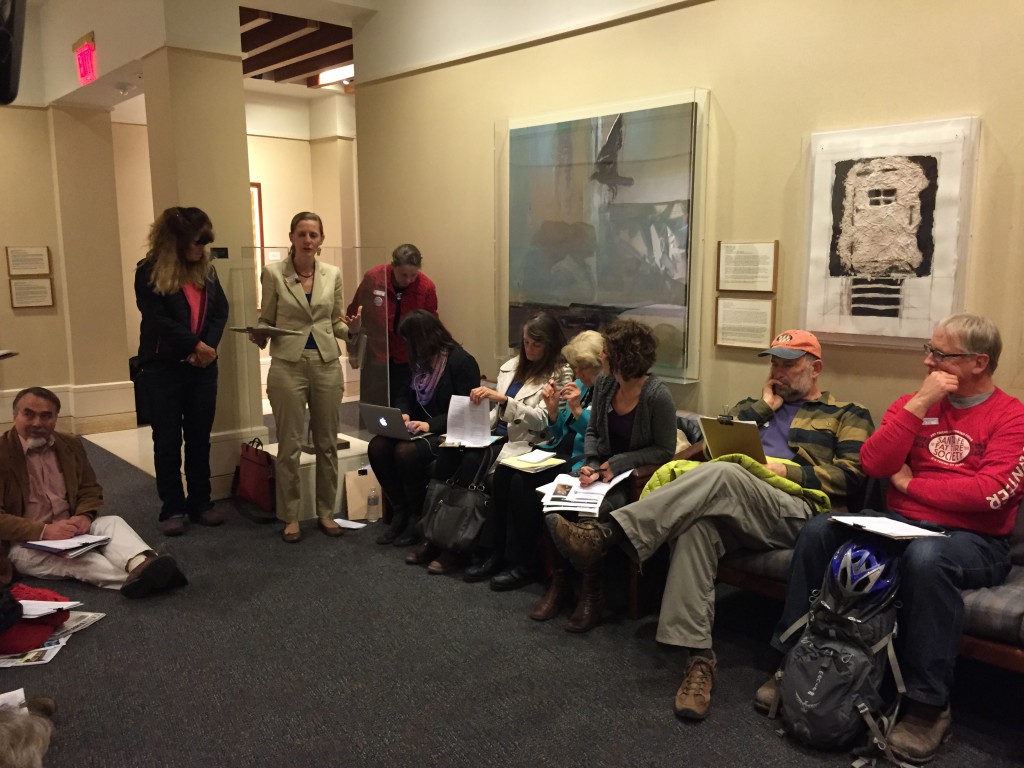 By: Gwyneth Doland
Originally published on New Mexico in Depth

They don’t have big expense accounts or cozy relationships with powerful lawmakers. They don’t even know where the bathroom is. They’re citizen lobbyists, and they got some training at the Roundhouse in Santa Fe Wednesday.

Members of 20 conservation groups converged on the state capitol and a few dozen of them attended a training session held by the Sierra Club.

They were teachers, writers and retired engineers, passionate about ending coyote-killing contests, cleaning up uranium mines and preventing the diversion of the Gila River.

Standing in a hallway near the Senate gallery, the Sierra Club’s Camilla Feibelman gathered the newbies around her in a circle and gave a pep talk. “We haven’t ceded the idea that lobbying is just for paid lobbyists,” she said, instructing the group of mostly Santa Feans how to find their lawmakers between the floor session and the afternoon committee meetings.

The volunteers were issued clipboards with a one-page guide to lobbying, information on the bills they were to talk about and a page on which to record which senators and representatives they talked to.

They also got a printed guide to the legislature that included photos of every member, “in case you don’t know what your legislator looks like,” Feibelman said.

Former state Rep. Nathan Cote, D-Las Cruces, who had sponsored a ban on animal-killing contests during his time in Santa Fe, offered to help the volunteers make connections with his former colleagues.

“You may end up talking to a staff person rather than a legislator,” he cautioned, but the volunteers were armed with pieces of Sierra Club letterhead on which they could write a note to leave with secretaries or analysts.

The important thing, Feibelman said, was to make your opinion known.

“We want to learn the position of our legislator on an issue, such as the Gila River diversion, and encourage them to do the right thing,” she said.

After a half-hour lobbyist boot camp, the troops were given their marching orders: Go find your lawmaker and tell them how you feel.

Janie Chodosh, a Santa Fean who identified herself as a writer and teacher, set off to find members of the Senate Judiciary Committee who might be persuaded to support a bill, banning coyote-killing contests, that was on their calendar for Wednesday afternoon.

She sought out Senate Minority Whip Bill Payne, R-Albuquerque, in his basement office but he was on the Senate floor; she left a note with his secretary.

On the third floor she walked into the office of the Judiciary Committee Chair, Richard Martinez, D-Española, who was just coming in the door behind her. She was surprised to find he was willing to sit down and talk with her.

After a 10-minute chat she emerged, energized by the chance interaction and buoyed by his promise of support.

Up another flight of stairs she managed to run into another target: Rep. Pat Woods, a cowboy-hat-wearing Republican from the Texas-New Mexico border who sits on the Senate Conservation Committee. Woods was unlikely to support the Sierra Club’s positions, she knew, but she was happy that he was willing to listen as he walked to his next meeting.

At the end of the day, Chodosh said she was grateful for the Sierra Club’s training and encouraged by her success in making connection.

Next time, she said, she’d come for just an hour and focus on making just one connection. It would be worth it, she knew.