Recently, the U.S. Environmental Protection Agency (EPA) granted, in part, a petition from New Mexico Governor Michelle Lujan Grisham, requesting that the agency list four types of per- and polyfluoroalkyl substances (PFAS) as hazardous waste under a federal pollution law.

Now, New Mexico is asking the U.S. Department of Defense to drop its lawsuit against the state and agree to clean up PFAS pollution from Cannon and Holloman Air Force bases.

“In accordance with the Biden-Harris Administration efforts to protect Americans from PFAS and [EPA] Administrator Regan’s binding commitment to Governor Michelle Lujan Grisham, I urge you to end the DOD’s and U.S. Air Force’s litigation efforts and begin working cooperatively with New Mexico to comply with federal and state law by implementing RCRA corrective action,” New Mexico Environment Department Secretary James Kenney wrote in a Nov. 10 letter to Secretary of Defense Lloyd Austin. “Continued insistence on the Trump Administration’s litigation is untenable and indefensible as a matter of public policy, good governance, and simple conscience.”

PFAS are a class of thousands of toxic, human-made chemicals that have been linked to reproductive and developmental problems, liver and kidney disease, and immune system problems. Exposure to PFAS has also been tied to high cholesterol, low infant birth weights, thyroid hormone disruption, and cancer, including non-Hodgkin’s lymphoma and kidney, testicular, prostate, and ovarian cancers.

In New Mexico, toxic firefighting foams used at Cannon and Holloman Air Force bases contaminated groundwater with high levels of PFAS. In 2018, the Air Force notified state officials and local well-owners of the pollution, but the military has yet to map the extent of the pollution plumes or begin cleanup.

When the state of New Mexico tried to compel the military to clean the pollution under state hazardous waste rules, the military sued, saying the state lacked the authority to require action. (New Mexico filed a second lawsuit, asking a federal judge to compel cleanup, but that lawsuit has gotten mired in multi-district litigation in a South Carolina court.)

According to the EPA’s earlier letter to Lujan Grisham, the agency will move forward in creating a rule classifying four types of PFAS as hazardous waste under the Resource Conservation and Recovery Act (RCRA). Although it’s a federal law, provisions within RCRA authorize states to implement regulations related to both hazardous and non-hazardous waste within their boundaries.

The EPA will also propose a second rule to broadly clarify that states can require clean-up of any waste that meets the RCRA statutory definition of a hazardous waste.

“The EPA now agrees with us that those chemicals, once they’re in groundwater, are a waste and they’re hazardous—they're a hazardous waste,” said Kenney in an interview this week with NMPBS.

The Defense Department needs to “come in line with the rest of the federal government and the state of New Mexico and actually play ball here,” Kenney said, adding, “To say that they don’t have to take responsibility for the waste they got into our groundwater is absolutely ridiculous. No other entity of the state of New Mexico has the ability to do that—and neither do they.” 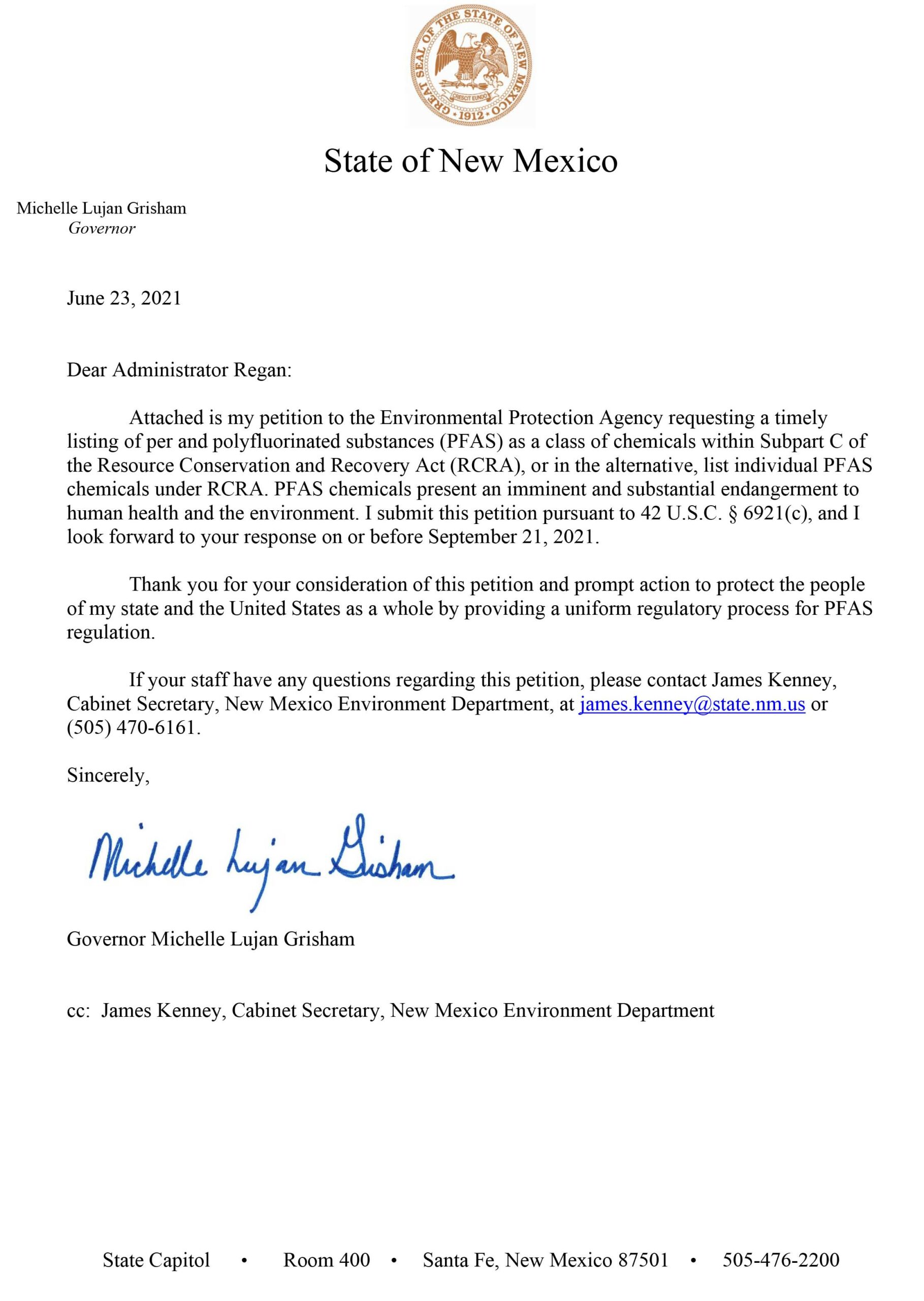 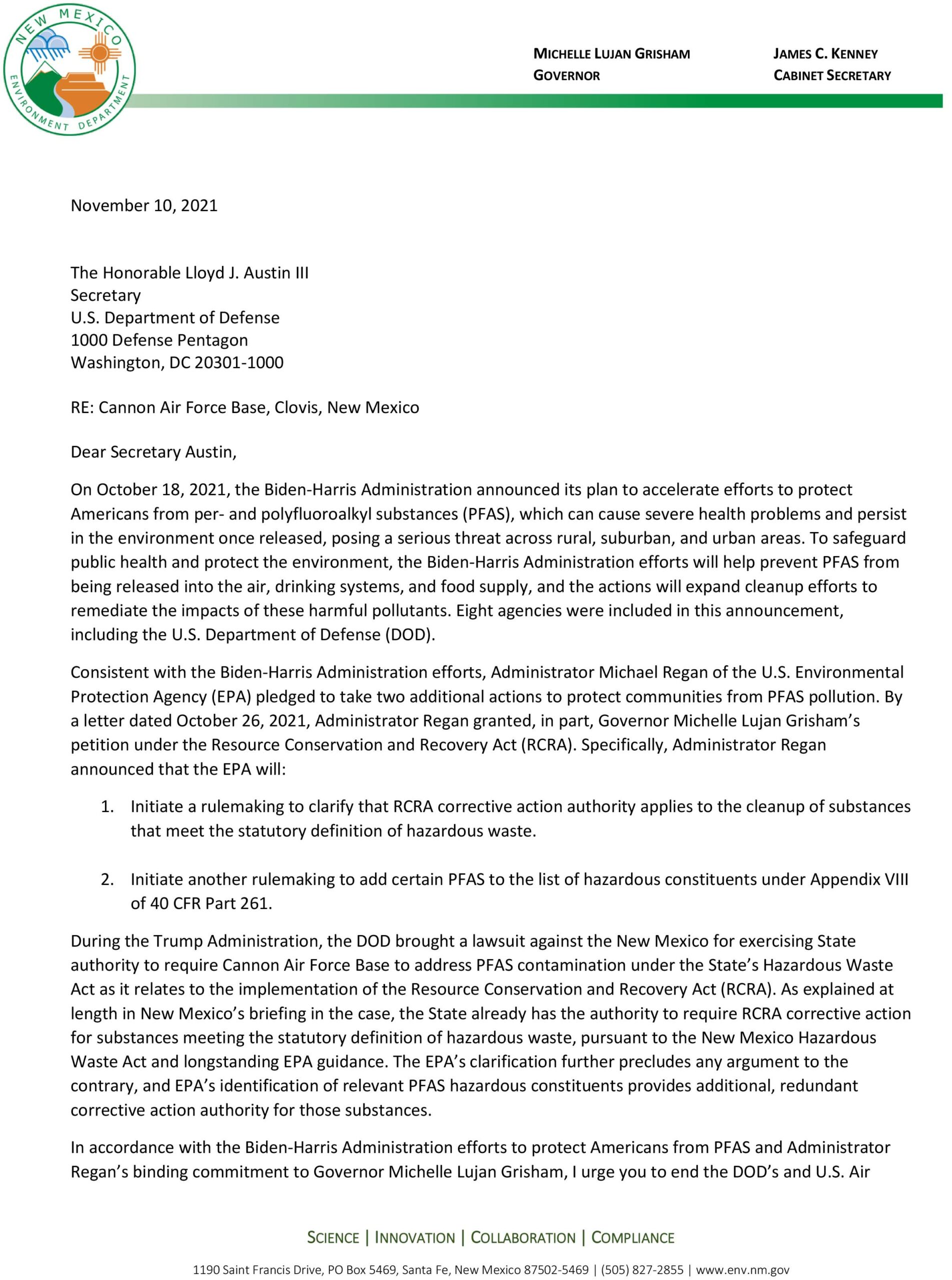 View/Download NMED's Letter to the DOD 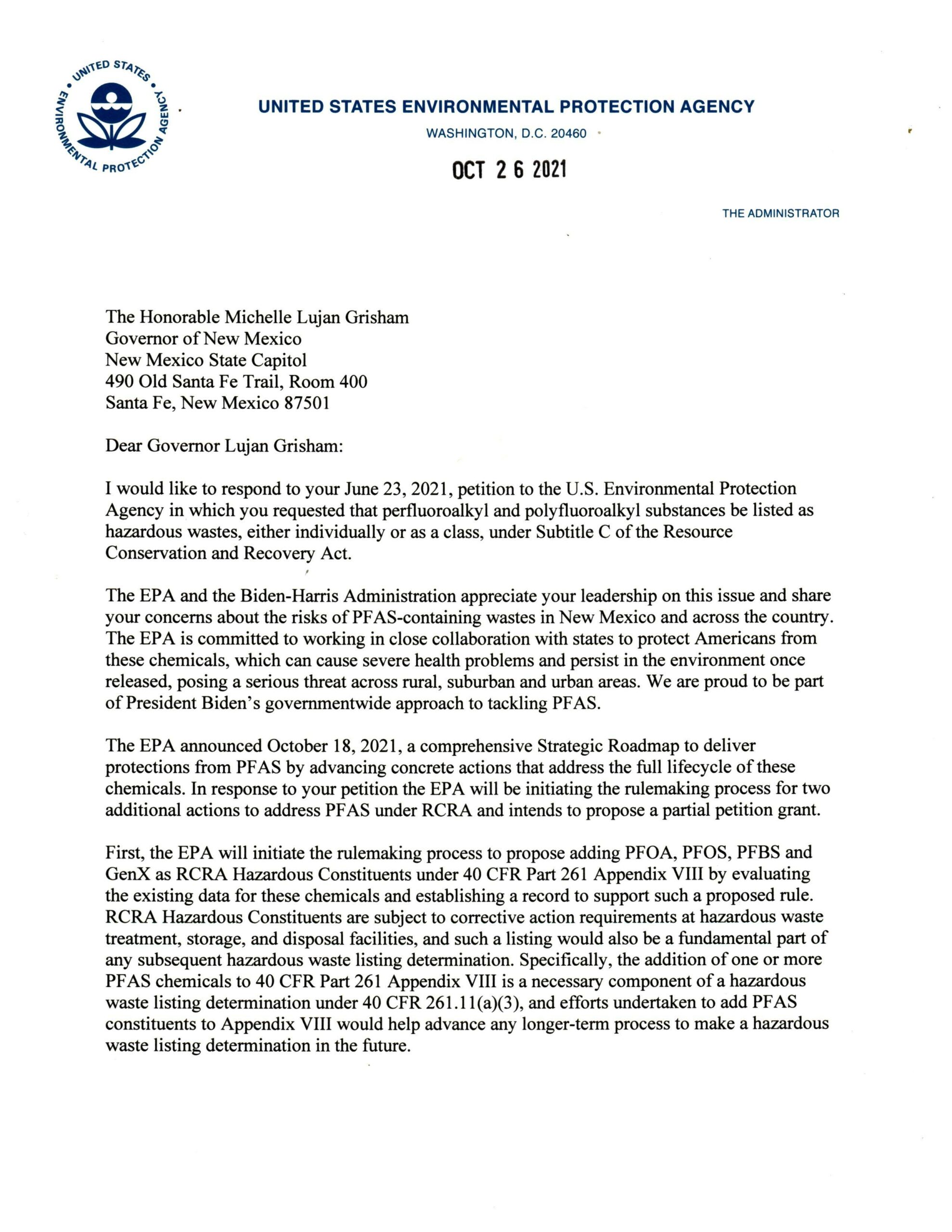 If you’ve been affected by PFAS contamination in your community here in New Mexico, call our tip line at (505) 433-7242. To read more coverage of PFAS in New Mexico visit “Groundwater War: New Mexico’s Toxic Threat,” which includes a timeline of events and studies on PFAS.