New tests by Clovis’ water utility show toxic chemicals associated with groundwater contamination from Cannon Air Force Base have been found in the city’s water supply.

According to a letter sent to customers of the utility EPCOR late this week, trace amounts of PFAS, or per- and polyfluoroalkyl substances were found in about 10 percent of the company’s 82 intake wells. In the letter, Clovis operations supervisor Mark Huerta wrote that EPCOR detected the chemicals at levels between four and seven parts per trillion.

Saturday, EPCOR posted an undated copy of the letter on its website, which continued to feature posts from 2018 with headlines such as “Cannon Air Force Base Plume and Why it Doesn’t Affect your Water.” 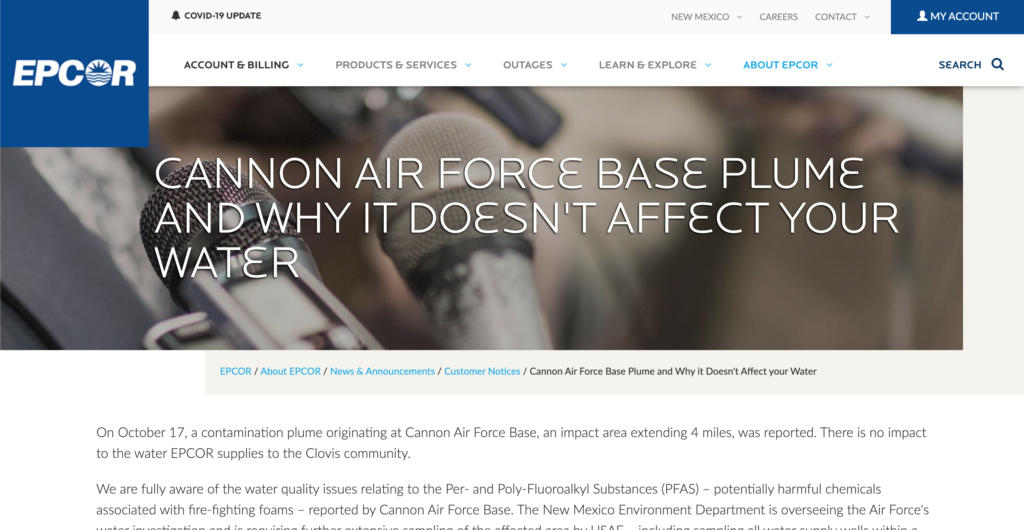 PFAS are a class of thousands of toxic, human-made chemicals. They are considered “emerging” contaminants because their links to cancer, immunological problems, and other health impacts are in the early stages of study. The U.S. Environmental Protection Agency has not set a regulatory threshold for the chemicals, though it has issued a lifetime health advisory of 70 parts per trillion. Without a federal regulatory limit, however, states like New Mexico can’t mandate water quality controls over PFAS.

In August 2018, the Air Force notified the New Mexico Environment Department that monitoring wells at Cannon Air Force Base had PFAS concentrations more than 370 times what federal regulators consider safe for a lifetime of exposure. Nearby private drinking wells were also tainted. Air Force testing also revealed levels of PFAS up to 1,294,000 parts per trillion—more than 27,000 times the advisory level—in waters below Holloman Air Force Base near Alamogordo.

In his letter, EPCOR’s Huerta wrote, “None of the sample results came close to EPA’s health-based recommended advisory level. And none of the water EPCOR supplies to you comes from the area surrounding the Cannon plume…”

EPCOR could not be reached Saturday through its local and toll-free phone numbers.

In the 2018 web post—as the Air Force revealed the extent of the PFAS contamination from Cannon—EPCOR reassured customers that the plume from the base just west of Clovis did not affect the city’s water supply. At that time, studies focused on water below the base itself, in addition to private wells within a four-mile radius of its boundary.

The presence of the toxic chemicals in the municipal water supply for Clovis, however, raises questions about how the plume might be moving underground, or if other above-ground uses could be spreading contaminated water.

In the letter to customers, Huerta wrote that “there is no health concern,” and added that the wells that sampled positive for PFAS have been taken out of service.

The Canada-based EPCOR has water, wastewater, and electrical and natural gas facilities in four Canadian provinces, Arizona, Texas, and New Mexico. In the Clovis area, it supplies water to about 16,000 households and businesses.

First developed in the mid-20th century, PFAS are manufactured and used worldwide, including in firefighting foams. The Air Force used those foams for decades, contaminating the groundwater beneath Cannon and Holloman Air Force bases, as well as more than 100 federal government bases nationwide.

Among the most-studied PFAS chemicals are perfluorooctanoic acid (PFOA) and perfluorooctane sulfonic acid (PFOS). Health impacts may include problems with the reproductive and developmental systems, liver and kidneys, and immune system, as well as high cholesterol, low infant birth weights, cancer (for PFOA) and thyroid hormone disruption (for PFOS), according to federal regulators.

The Air Force and the New Mexico Environment Department have filed suits and countersuits over the PFAS contamination and its cleanup.

In early 2019, the Air Force sued the state, challenging New Mexico’s attempt to force the military to address the PFAS contamination under the hazardous waste permit issued by NMED. In March 2019, New Mexico filed its own complaint against the Air Force, asking a federal District Court judge to order the military to act on and fund cleanup at Cannon and Holloman.

On Feb. 14, New Mexico In Focus will feature an interview with New Mexico Environment Department Secretary James Kenney about PFAS contamination, including the latest revelations by EPCOR. In August 2019, environmental correspondent Laura Paskus interviewed Kenney about the state’s battle with the Air Force over PFAS.